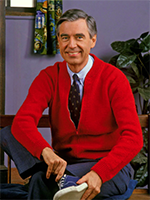 I am thinking of Mister Rogers. You know the guy that had the show on public access television where he would put on a puppet show and talk about serious emotional challenges that young people deal with. He had this thing he did at the beginning and ending of every episode. He would walk into the front door, usually holding the object of his lesson that day and start singing his entry song to a jazzy little tune that he composed himself. He would always take off his jacket, but on a cardigan sweater. He would take the time to zip up or button the sweater, then hop over to his bench and sit down and take off his dress shoes. He would show you the dress shoe as he took it off and then go through the act of putting on a more comfortable shoe. Navy blue, with laces and comfortable soles if I recall. In what seemed like a very uncomfortable drawn out sequence he would tie each shoe as he repeated the chorus of “won’t you be my neighbor, could you be my neighbor.”

When I was a kid, I thought this was him coming home from work. He would become less of that old adult dude and become a more likable adult that could talk to us kids. That is how I rationalized what he was doing, because it did not make much sense to me. I also noted that he repeated the same process backward as the show ended. He began and ended the show in the same manner. This confused me a bit, because, it seemed to me that he should really be just getting ready for bed. Not putting a jacket and shoes on to go back out into the adult world. However, here I am many decades later and I FINALLY understand why Mister Rogers did this before and after each show.

He was creating a transition.

I think my young mind had part of it right, he was indeed making a transformation from Fred Rogers, adult with adult problems to Mister Rogers, puppeteer, song writer and child psychologist. However, I now know the real truth. He needed the transition, and not his audience. This was the way he made this work. This was the way that he could become part of the world of make believe and relate to the camera, which he spoke to as if he was speaking right to your soul. When he came on set, he made his team humor him as he always came onto the set through the fake front door. He always did the same thing, and he always had the same transition. He needed to let go of the pressing matters of his own life and truly focus on his at form and that is what he did.

I thought about this a lot this last few days. My wife has been noticing that I am having a difficult time transitioning from work to home life. When I am sitting in the home office all day, it is hard to quit and go to my home life. That transition is hard, leaving the intensity and stress of all day long phone calls and battles to the cool, fun, happy, and sexy father and husband. OK. OK. I threw that last descriptor in there for giggles, lets be honest, but since it is my blog I can say whatever I want – right?? My wife sent me a blog from an organization called Aurelian Coaching. I have no idea who they are, but they had an interesting concept. I will get to that in a moment. My point is that learning to transition from thing to the next is an important aspect of success.

When I wake up in the morning I transition to “runner dude.” I get dressed in that uniform, and I do that activity and at a certain level of intensity. When I am in runner mode, that is what I am. I am so used to that it has become almost automatic for me. I transition smoothly and easily into that mode of my life with little difficulty. I also transition out of it, I move quickly into get ready for work mode. I transition into work clothing, I get setup for work and I am good to go.

Early in the process of following the 365 commitment formula, I learned to transition at the end of the day by reviewing my list and closing the day with a prayer. That gave me a good transition before bed and I soon found myself able to sleep better as a result. However, with all that said, I am struggling still with the transition away from work to home. My initial concept has always been that I need to “wind down” or that I need to “relax.” Well according to this blog that my wife gave me, I have been completely wrong about that.

You see I do not need to wind down at all, I need to transition my mental energy, at the same level, into something different. This is the problem. I am trying to transition away from work, where my mind is all spun up to home life where I am trying to spin down my mind. Not working, at all. Instead, I should transition to something really engaging mentally, but just not work. I am experimenting with that today by writing this blog at the end of the day instead of the beginning. Perhaps the stimulation of writing will be the catalyst of mental energy that helps me transition.

I have thought of some other ideas, I could have a project that I am working on in the garage, a creative project. I could work on my chess game, play a few rounds of speed chess for example. I could spend 30 minutes reading something really interesting, yet significantly complex. Lots of ideas here, but this is just the beginning of my new experiment. I will report back if I find anything that really helps me.

Perhaps putting on a Cardigan Sweater at the end of the day is not quite the transition that I am looking for. However, Mister Rogers certainly had the right idea. Deliberately creating transitions in our lives so that we can get in the right frame of mind to make sure we get the most value out of each moment.